What clients have to say…

“Hagen worked with us on a campaign for a countrywide event and TV property. He secured invaluable radio and print coverage, reaching an audience of hundreds of thousands. His writing ability is excellent and he effortlessly nailed the right tone and content, helping us reach all our media goals. – Melinda Shaw, Shaw Media

“Needing a scriptwriter to assist us with our new promotional video, we were referred to Hagen Engler by Nico Steyn from Intellilab. Hagen visited us for about 30 minutes, and provided us with a spot-on preliminary script within 48 hours. We literally only changed one or two words on this initial script, before passing it as the final script. We were flabbergasted and pleasantly surprised at Hagen’s spot-on approach and knowledge of our business. He obviously had to go and dig a bit and combining this with his natural talent left us in awe when we first read his script. We can assure you Hagen comes highly recommended. We will definitely make use of him for any future assistance we might need.” – Fergus Derwin and Monya de Kok, Genrec Engineering

“The way Hagen wrote my book was superb. He was always available for meetings at short notice, and willing to help no matter what my query was. He  handled the project management of the book exceptionally well. He is easy to work with, and I would have no hesitation in recommending him for any form of writing.” – Basil O’Hagan, entrepreneur, marketer, publisher

“What an effortless engagement it is, working with Hagen.  He has a ready and canny grasp of the task at hand – be it narrative, commentary, creative structure or assessment – and his work is delivered with an amenable promptness.  His skill to understand the voice of the work is a distinct quality that offers a unique and charming tone to productions.  What a pleasure!”. – Anne Williams, Executive Producer, Intellilab

“It is a privilege to work with Hagen. He produces quality work you can be proud of. We worked on a fiction book, training manuals, publishing and content for media and digital promotional marketing. Once you have worked with Hagen,  you’ll keep coming back for more.” – Ali Murray, counsellor and publisher

“Hagen is a creative genius with real integrity. He is committed to pushing the envelope, his own and those around him in a like-able and palatable way, even when he’s telling you your idea sucks. He’s the best collaborator I’ve ever worked with, and truly committed to making great work that is honest and has integrity. I’m lucky to be working with him on an ongoing basis.” – Zaheer Goodman-Byatt, owner, Light And Dark Films

In addition to my extensive editorial and scriptwriting work for prominent media outlets, I do much writing for corporate and private clients. This sometimes takes the form of “branded content” – feature-type stories that are similar to editorial. I also regularly edit and ghostwrite books for independent clients.

On an ongoing basis I supply scriptwriting services to the Intellilab at the University of Johannesburg. This comprises screenwriting for documentary series and features used internally and broadcast on the national DStv satellite channel. I also write scripts for internal and external corporate use, including this corporate video for steel fabricator Genrec…

I was part of the PR team that helped build this new combat sport into a phenomenon on the South African fight-sports scene. LFS was an elimination tournament and reality TV show that culminated in a nationally televised national championship at the Ticketpro Dome in Johannesburg. Our team got the event exposure on Highveld 94.7, e.tv, ECR, The Star, Weekend Post, SABC news, GagasiFM and UkhosiFM.

I have worked on two seasons of the SABC children’s show Rivoningo, as scriptwriter and story editor. The show is a combination animation/live action show for children 6-9, produced by Asi-B films. I also was a writer on the first season of the animation show Luminati, produced by Pollen Creative Media.

For advertising agency Owen Kessel, I wrote the content for an online quiz to run in the build-up to the SA Music Awards. This consisted of 300 questions and answers on contemporary urban music. 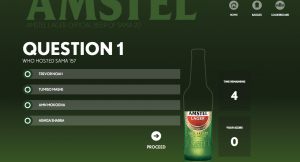 With the Twisted Toast agency, I helped create content for a campaign by mining group Exxaro Resources. The campaign comprised social media, written features and video content. It related to the company opening a low-cost housing development it had built in Botleng, Mpumalanga near Delmas. Twenty-five houses were built for elderly community members. The project also helped empower contractors and labourers in the community. My contribution was conducting interviews and writing features for the Exxaro Facebook page, writing a documentary script and providing content for the social media campaign. Here is one of the features… 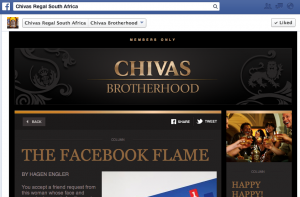 For the Chivas Regal Chivas Brotherhood Facebook platform I wrote lifestyle advice columns under the theme “Be the bigger man”. This branded content was managed by the Jingo Ink agency and Native. I wrote about 35 columns. Here is an example.

I was a writer for a multi-platform execution for Unilever‘s Vaseline Men property for their Evolution campaign. The campaign was managed by A Better World Network and Hardy Boys. My role was to write columns that would appear as native advertising in print magazine FHM. I also generated copy for their MSN Locker Room website and for a web survey that helped determined how “Evolved” modern men are. Here is a column I wrote for the print component of the campaign in FHM.

For Peermont Resorts, Hotels and Casinos I have written numerous press releases and also created branded content. These comprised features and interviews, for instance with boxers set to compete in tournaments at Emperors Palace. I also wrote features for submission to news outlets to publicise major poker tournaments at Peermont resorts. This was part of my involvement with the 10 Plus Media network. Here is a sports feature written for Peermont.

For the Octagon agency I wrote the text for a coffee-table book of photographs. The book was to commemorate the Nelson Mandela Sport and Culture Day, held at FNB Stadium, Johannesburg on August 17, 2013.

For corporate commissions contact your philosophical cousin Hagen Engler on hagen@hagenshouse.com or call 082 825 5272.