Zach is a maverick himself, refusing to conform to stereotypes. He has achieved in the field 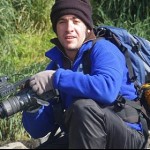 of academia, where he has earned a masters in science at UCT, and a scholarship to the Woods Hole Oceanographic Institute in Massachusetts, U.S.A. He has made waves in that most urban pursuit, frontman for a punk-rock band called Kombat Fudge. But it is surely as a wildlife filmmaker that he will make his  most enduring mark.

Returning from his stint in the USA, he threw himself back into the trade he was raised in – filming nature. He has done so with aplomb, and his work now appears in TV shows across Southern Africa.

My goal is to continue capturing amazing moments in nature and sharing my deep passion for the wild with viewers across the globe. I want to spread the philosophy of conservation.”

This insert from the 50|50 show on SABC2, was made accompanying a bird-survey team to the Okavango – the last true wilderness area in Southern Africa. Striking a fine line between reportage and advocacy, the film showcases the awe-inspiring beauty of this Botswanan paradise and explains that if plans to exploit the area’s mineral and water reserves go ahead, humanity will lose its last chance to learn the secrets of balanced co-existence.

Cinematography is impeccable, and this is one of the more dramatic nature-doccies you’ll see, the team survives attacks by a pack of 50 hyenas, mock charges by elephants and hippos and a close call with a monster crocodile.

You need a little punk-rock attitude to blithely hang off the edge of a mokoro filming while a four-metre crocodile comes to eat you. That’s the kind of thing Zach Vincent pulls off, while still making it look like a million-buck production.

On a less personally life-threatening tip, a forthcoming piece sees Zach film the hatching of a set of chicks from a pair of Blue Swallows – the most endangered bird in South Africa. Only 35 breeding pairs remain.

Somebody’s gotta put the word out, and Zach seems to have decided he’s one of the guys to do it. He could have succeeded at whatever field he chose, not least rock ‘n’ roll, so that’s nature’s gain.

“My goal is to continue capturing amazing moments in nature and sharing my deep passion for the wild with viewers across the globe,” he says. “I want to spread the philosophy of conservation.”

We look forward to seeing the next instalment in this guy’s fascinating career.

To see some of Zach’s substantial portfolio of wildlife work go here.